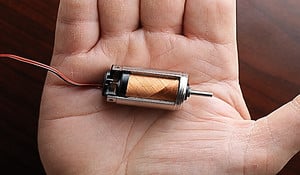 The enduring popularity of coreless brushed DC motors comes from a combination of their simplicity of design, fast transient responses, negligible iron losses and ease of control. With speed proportional to applied voltage, the motor can be simply driven using a continuous linear regulation power supply. But is this always the best solution?

From robotics and industrial automation to electrical appliances and even toys, there are many applications for brushed DC miniature motors that demand driving the motor at more than one load point or through specific load cycles. While this can be achieved with continuous linear regulation power supplies, these tend to be inefficient and bulky â€“ two characteristics which are disadvantages in battery powered equipment.

One alternative is pulse width modulation (PWM) voltage regulation. Here the input power to the motor is continually turned on and off at a high operating frequency: the combination of the coil inductance and the motor inertia serves to smooth out the speed, such that the motor behaves as if it is seeing a pure DC voltage. The motor speed is defined by the duty cycle â€“ the ratio of the on time to the off time of the applied voltage.

Control via PWM voltage regulation addresses the two key drawbacks of continuous linear voltage regulation, with compact drives that are highly efficient. Output torque can be more precisely controlled and, with correct design, any resulting eddy current effects â€“ an inherent trade-off of using PWM with a motor â€“ can be minimized, allowing the motor to be optimally driven. The improved efficiency of the PWM drive reduces the heating of electronic components and, in battery powered applications, increases battery life.

The argument for turning to PWM control, then, is a strong one. However, there are a number of design considerations to take into account when using a PWM drive with brushed DC motors, including parameters such as PWM frequency and duty cycle all having an impact on the performance and lifespan of the motor.

The brushed DC motor can be simply modelled as a series resistor/inductor (RL) circuit. For any such circuit, when voltage is applied across it, the current rises on a curve towards steady state value. And when the voltage is removed, the current follows an inverse of the curve towards zero. The time constant of the RL circuit defines the maximum rate of change of the applied voltage in the circuit.

If the PWM frequency is increased beyond this threshold value, there is insufficient time for the current to reach its steady state, and the current oscillates between two non-steady state values, giving rise to current ripple. The ripple is directly proportional to the applied frequency and as the frequency of the PWM is increased further, the ripple affect reduces to an acceptable range. This current ripple has a number of detrimental impacts on motor performance, including non-linear torque behavior, since output torque is proportional to current. Hence, the frequency is chosen such that the torque ripple doesnâ€™t impact the application performance.

Further, resistive heating in the motor winding is proportional to the square of current. Excessive ripple current will increase the heating in the winding pack, so decreasing motor performance and impacting on motor life.

For brushed DC motors that do not use iron laminations, the eddy current and hysteresis losses in the magnetic circuit are directly proportional to the current ripple, so again excess current ripple would reduce the overall performance of the motor.

Current ripple also has a direct impact on the commutation of the motor. For precious metal commutation, electro-erosion of the brushes during the current spikes can be a serious issue, with electro-erosion being proportional to the square of the effective current through the winding. Brush wear already represents the dominant failure mode in brushed DC motors, and increased electro-erosion will only accelerate their wear.

For carbon brush commutation, high levels of current ripple increase patina accumulation â€“ the copper oxide layer formed on the commutator surface of the carbon brush. While a thin film is advantageous in improving the commutation and reducing the friction, as the film size increases the brush contact will deteriorate. At moderate to high speeds this might not affect the motor performance significantly, it would certainly begin to have a noticeable effect at lower operating speeds.

Given that ripple current has such an impact on performance and on the lifespan of the motor, how do we minimize it? It should be noted first that current ripple is maximum when the duty cycle is 50%, so the goal should be to run the motor away from the 50% duty cycle.

Portescap recommends engaging with a knowledgeable engineer to discuss the application specifics, as the interdependencies between the requirements of the application, the performance characteristics for the motor and the resulting design or specification of the PWM drive are complex. Getting a firm grasp on these dependencies becomes even more important in battery powered applications, where the requirement to maximize application performance comes hand in hand with the need to extend battery life.

For more information about Portescap, read the complete white paper or  visit our product page.