Coreless brush DC motors are utilized in increasingly advanced devices with demand for higher power density in smaller packages such as insulin and infusion pumps, as well as biologic delivery devices. Since motor reliability is particularly important for manufacturers, this whitepaper illustrates the steps of the Weibull analysis method to predict the life of coreless brush DC motors. The Weibull analysis estimates the expected life of a motor using a complex mathematical model that is based on the test results of a few motor samples under simulated application conditions.(Figure 1)

THE TORQUE-SPEED CURVE FOR A CORELESS BRUSH DC MOTOR

The characteristics of a DC motor are represented by the motor’s speed torque curve. Figure 2 graph of a coreless brush DC motor with precious metal commutation shows torque on the X-axis and speed on the Y-axis.

With increasing demands for higher speeds from a coreless miniature DC motor, the stress on its commutation system or bearing design also increases. Increasing the maximum torque requirement also increases stress on the thermal and mechanical design of various motor subassemblies, showing that the reliability of the motor varies when operating at different load points (torque and speed combinations).

It is important to understand the application load points and motion profile, such as the torque-speed requirements over time with direction of rotation, the environment in which the application is operating (temperature, humidity, vibration etc.), and the life expectancy of the motor. Most equipment manufacturers have specific criteria regarding the life of the product they develop, which is tied to their warranty. The target life of a motor is a function of the expected life of the product.

Reliability is typically estimated by testing a few samples in a lab that replicate the actual operating conditions of the application. To test these conditions, a sample motor is mounted on a fixture, loaded with an eddy current or electromagnetic hysteresis brake and connected to a function generator. The brake applies constant torque to the motor output shaft as the function generator creates the required torque-speed-time characteristics, then loads the motor accordingly. The testing set up is designed to match closely to the customer specifications.

Ideally, 5 to 30 samples should be tested, which is dependent on motor availability, the required data accuracy, and the capabilities of the testing facility. The more motors that are tested, the higher the confidence level of the predicted motor life.

Reliability tests are performed on each motor at the defined load points, duty cycle, and environmental conditions. The tests are designed to determine the failure point of the motor, with the failure criteria clearly defined before starting the test. Failures can be detected by observing a sudden increase in current drawn, overheating, high noise and vibration, or mechanical failure; therefore, a reliability engineer needs to measure the parameters continuously for changes against the baseline data.

Once time to failure (TTF) data of all samples has been collected (data from at least three samples is recommended), the failure data points are analyzed using the Weibull method. Weibull distribution plots are widely used for estimating reliability since the analysis is based on a generic distribution of data that can be used for all kinds of failure types (i.e., decreasing, constant, or increasing) depending on the beta value.

A Weibull distribution can be represented by a line (Appendix) on a Weibull probability plot or on log-log paper where the Y axis represents the failure rate or unreliability and the X axis represents the time to failure. The slope of this distribution or line is called the shape parameter (β). The intercept of this line with X axis is used to calculate scale parameter or characteristics life (η). The characteristics life is life at 63.2% of failure.(Figure 3)

The Weibull plot can result in the life of motor falling in either of three distinct regions, often called the famous bathtub curve. If β <1 than the failure are infant failures, this type of failures can be attributed to manufacturing problems like poor soldering, high axial play, wrong preloading, etc. If β = 1 then the failure rate is constant and are called random failures. This is the life where we mainly aim. If β >1 the failures are wear out failures or useful life failures and they increase with time.

The traditional approach to performing a Weibull analysis is the plotting method, which begins with initial assessment of the available data. The individual failure times are ranked based on the number of observed failures and suspensions, after which they are plotted on Weibull probability paper. A best-fit line can then be drawn through the data points, allowing analysts to determine the distribution’s fit to the data. The best-fit line will reveal the motors characteristic life (η) and determine if/how the failure rate is changing with time (slope = β).

In order to accommodate the manipulation of the Weibull CDF (Cumulative Density Function) F(t) into linear (y=mx+b) form, the y-axis of Weibull proabability paper is in a natural log, natural log scale and the x-axis is in a single natural log scale.

For better understanding we will discuss a case, where five DC motors of 16 mm size are tested at 70% Power and maximum speed (point 4 of Speed-Torque Curve), and all the test units were tested to failure with their failure times recorded. The recorded failure times are 1488, 2304, 1224, 2304 and 2976 hours. The failure times needs to be arranged in increasing order to calculate their Median Rank which will be used to plot the data points in probability paper.

The X and Y coordinates are calculated as shown in Table 1 and used for probability plotting.

A best-fit line is drawn through the data points to determine the parameter values of the Weibull distribution.

Once the Weibull parameters are estimated, the B10 life can be calculated. B10 life refers to the time by which 10% of the units in a population will have failed or the time at 90% reliability level.

In this case, B10 is calculated at 1080 Hrs. This can be estimated from the probability plot by drawing a vertical line from the point where the probability line meets 10% Unreliability in as shown in Figure 4. The corresponding value in x-axis represents the B10 life.

This systematic approach helps estimate the reliability characteristics of coreless brush DC motors used in different applications. This paper reviewed the method to estimate motor reliability through testing and analyzing the failure data under normal use conditions. Since the testing period under normal operating conditions may take several months or even years to complete, the Accelerated Life Test (ALT) method estimates reliability during an abbreviated schedule using one or more motor stresses (torque, speed, temperature, vibration, etc.) during testing.

Where η is called scale parameter and β is called shape parameter.
The next step is to linearize this function in the form of straight-line y = mx + b:
For this we need to transfer 1 in above equation to left hand side and taking natural logarithm of this 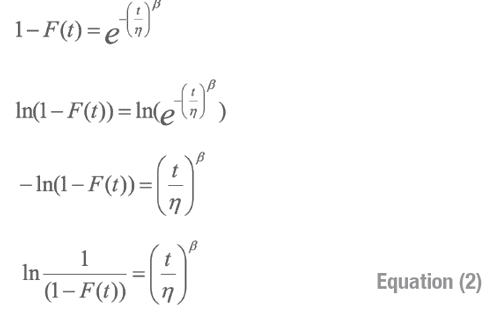 Again taking natural logarithm of this

This equation resembles with y = mx + b because all the variables are of the first order. This is now a linear equation, with a slope of β and an intercept of –βln(η) .

Therefore the x- and y-axes of the Weibull probability plot can be made. The x-axis is simply logarithmic, since X = 1n(t). The y-axis is slightly more complicated, since it must represent:

Where F(t) is the unreliability. 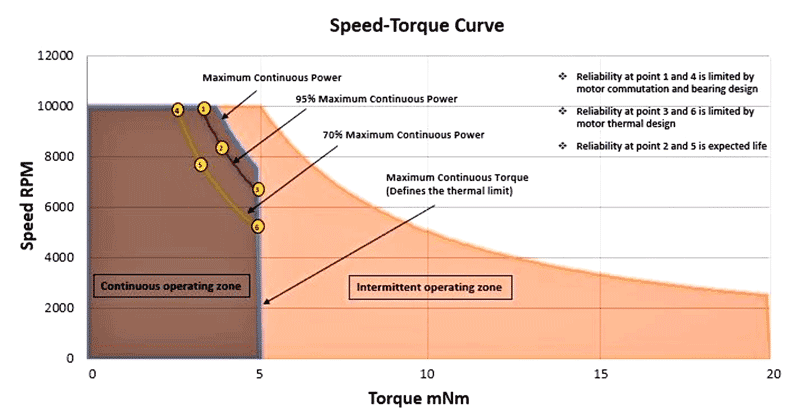 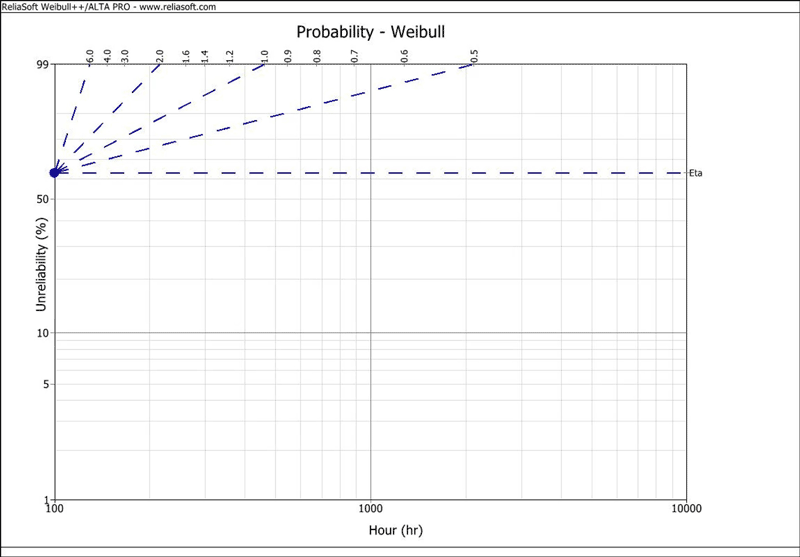 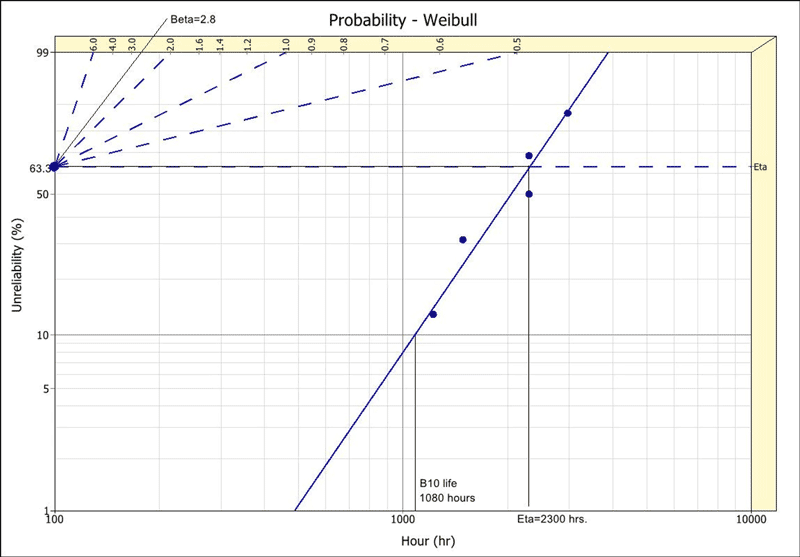