An Overview of Drivers for Brushless DC Motors

Think that brushless DC motors belong to the DC motor family? Think again! BLDC motors actually fall underneath the AC motors category, given that the windings of these motors carry alternating current (AC); however, almost all BLDC motors in the world are powered by either batteries or DC power supplies. The motor driver plays a key role in the optimal operation of BLDC motors, as they are used to control the direction and timing of the current into the motor coils. They’re also commonly called inverters, as they are responsible for DC to AC conversion.

An Overview of BLDC Motors and Drivers

As the name would suggest, BLDC motors, or brushless DC motors, are motors with no brushes. BLDC motors with permanent magnets are known for their higher efficiency and high reliability in a compact package, with the commutation in the coil being made electronically through the inverter bridge. These characteristics mean that BLDC motors are ideal for a wide variety of critical applications such as medical infusion pumps, aerospace and defense (A&D), and robotics.

Figure 1 illustrates a typical block diagram representing a BLDC driver with motor. The driver can be conceptualized as consisting of two main sections: the power circuit and the control circuit.

The control circuit is the brain of the driver. It generates the required commands (switching signals) which are followed by the power circuit. The switching of currents in the motor windings is known as commutation. Commutation logic is an important aspect of the BLDC drivers’ performance and significantly affects impacts the performance of the motor. This commutation logic is implemented in the control circuit by using either a dedicated ASIC (Application Specific Integrated Chip) or a digital computation device like a microcontroller.

The power circuit in the driver consists of components that handle the main power used to drive the motor. Mainly power switching devices such as thyristors, MOSFETs, and IGBTs are used to design power circuits that follow the commands received from the control circuit.

Permanent magnet BLDC motors fall under the synchronous motors category, and to drive these motors, rotor position information is key. Based on the rotor position information, the control circuit enables the power switches (MOSFET/IGBT) to switch the current and energize the required winding of the motor at the right time – i.e. having 90° between the magnetic field created by the magnet and the magnet field created by the current in the coil.

A BLDC motor driver detects the position of the rotor either by using sensors or by being sensorless. This means that the two types of BLDC drivers exist:

One commonly used sensorless driver technique is known as zero-crossing sensing of the back emf. In the case of trapezoidal control for the sensorless drive, two windings are energized at a time, with the back emf on the third unenergized winding being monitored to determine the rotor position. One disadvantage of this method is that it does not work below a minimum speed, as the back emf voltage is too small to sense. This means that most sensorless drivers operate the motor in open loop until a certain speed is reached.

A second, more sophisticated sensorless technique requires measuring the current and the voltage in each phase to find out the rotor position. However, this method only works when the motor reaches a given speed.

As explained above, sensored and sensorless drivers differ in the way they obtain the rotor position for commutation. Once the rotor position is obtained, there are generally two approaches to commutation: trapezoidal and sinusoidal. The names of these methods relate to the voltage signal waveforms at motor winding as shown in Figure 2. 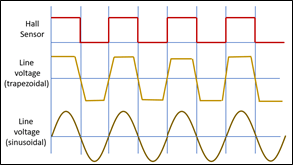 Selection of a sensored or sensorless driver and trapezoidal or sinusoidal commutation method must be made based on the end application needs, such as the number of connections, start-up load, torque ripple, response rate, and operating environment. Portescap has a variety of BLDC drivers in our product portfolio that are based on the application requirements. We also have unique integrated electronic motor solutions where the driver is an integral part of the motor, which are best suited for applications where space constraint is an issue. Reach out to us here to discuss!