How Iron Losses Directly Influence The Selection Of A BLDC Motor

Engineers strive to continuously improve the performance, efficiency, and compactness of critical devices and applications across a variety of industries and markets. The goal is not only breakthroughs in innovation, but also continuous advancements in the performance and efficiency of essential components.

This is especially true in the world of miniature electric motors, which are vital to saving, improving, and enhancing the lives of many. One key aspect of a motor’s performance is its efficiency, which is defined as the ratio of the mechanical power and the electrical power:

Because efficiency directly impacts the motor’s heating and power consumption, it must be selected with the utmost care in order to make the most of the available space. Here we explore a BLDC motor’s efficiency and losses, as well as how this plays a key role in the motor design and selection process.

THE DIFFERENT LOSSES IN A BLDC MOTOR

Friction Losses. Friction losses are generated by the ball/bush bearings' and depend not only on the application’s use (speed, load, acceleration) and environment (temperature, dirt, etc.), but also on the bearings' intrinsic parameters, including material, wear, lubricants, and sealing.

Copper Losses. The copper losses, also called Joule losses, are generated by the resistance of the coil. Torque is directly linearly proportional to the current (T=k*I), so the more torque a motor provides, the higher the copper losses that are generated. This follows the quadratic function below:

Keep in mind that the resistance will increase when the motor is heating, which will reduce the efficiency according to the below equation:

Iron Losses. Iron losses can be easily misunderstood but have a substantial impact on the motor performance. The losses highly depend on the frequency of the variation of the magnetic flux into a material, meaning the faster a motor rotates, the more losses are generated.

To better understand this phenomenon, a small experiment can be conducted. A magnet can be thrown into a slightly ferromagnetic (copper or aluminum) tube, where it can be observed that the speed of the falling magnet is much lower than what would be expected. We can compare this by changing the tube to plastic or by replacing the magnet with a piece of metal that is the same size and weight.

Why does this happen? According to Lenz’s Law, when the magnet is falling through the tube, the change of magnetic field induces currents flowing in a direction to oppose the change producing them. This is what reduces the speed of the magnet.

The iron losses are generated by two phenomena:

According to Faraday’s Law, when a magnetic field is applied into a conductor, a current is generated through it. And because the material has a specific electrical resistivity, it creates some losses (R*I²).

With the previous formula, we can see the parameters that play a large role in creating these eddy current losses (Figure 3). Not surprisingly, the frequency of magnetic field reversal has a substantial impact, as does the speed of the motor; the intensity of the magnetic field and even the thickness of the material play an important role as well.

An effective way to reduce the impact of the material’s thickness is by laminating the core material. This creates a smaller path for the current to travel through, meaning it will split into several small currents instead of one large current. As the losses are created with the squared value of the current, this is highly effective (t/2 => i/2 => eddy currents/4). One thing to keep in mind is that in order to avoid the current flowing between two laminations, each lamination must be insulated from one another with a coating.

When the magnetic flux is reversed into a ferromagnetic material, the material is magnetizing and demagnetizing, which creates a loss of energy. To remove the flux density, we need to pass the point of coercivity by providing an opposite magnetic flux (Figure 4).

These losses depend primarily on the magnetic induction in the circuit, but also on the material properties (such as permeability and volume) and the frequency of flux variation flux. This is why it is key to select the right material for the right speed.

The Steinmetz equation helps us to calculate these hysteresis losses and better understand the influence of each parameter:

The different losses generated by an electric motor limit its maximum power, as it would burn if it exceeds a specific temperature depending on the motor design. This means that it is critical to select the right motor based on the specific working point (torque and speed).

Joule losses are mainly generated when creating torque, while iron losses are usually generated at high speed. That’s why for a given motor, the possible max continuous torque decreases when the speed increases (Figure 5).

Impact of the Number of Poles

Since iron losses depend highly on the frequency of variation of magnetic flux for a similar speed, increasing the number of poles increases the number of variations for one motor turn. For eddy current losses, this happens with the square of the increased frequency, which can quickly reduce the efficiency of a motor.

The power curves of the motors illustrate the limits of continuous operation of a motor in air at 25°C, including the losses. In Figure 6 we can see a comparison of two Portescap motors which have the same package, but with one motor having 2 poles and the second motor having 4 poles.

When selecting an electric motor, it is critical to consider the different losses, as the motor’s limits are thermal. Iron losses play a key role in the motor’s efficiency, especially at high speed or for multipolar high torque designs. Optimizing the ratio between joule and iron losses will allow energy to be conserved and improved devices to be developed.

Portescap understands these characteristics extremely well and takes great care to design motors with high performances and lower losses. One design doesn’t fit all applications, so the Portescap team is dedicated to developing a diverse portfolio of motor technologies are developed that address devices and applications with critical working points.

Figure 2 - Experiment with a Magnet Falling into a Copper Tube 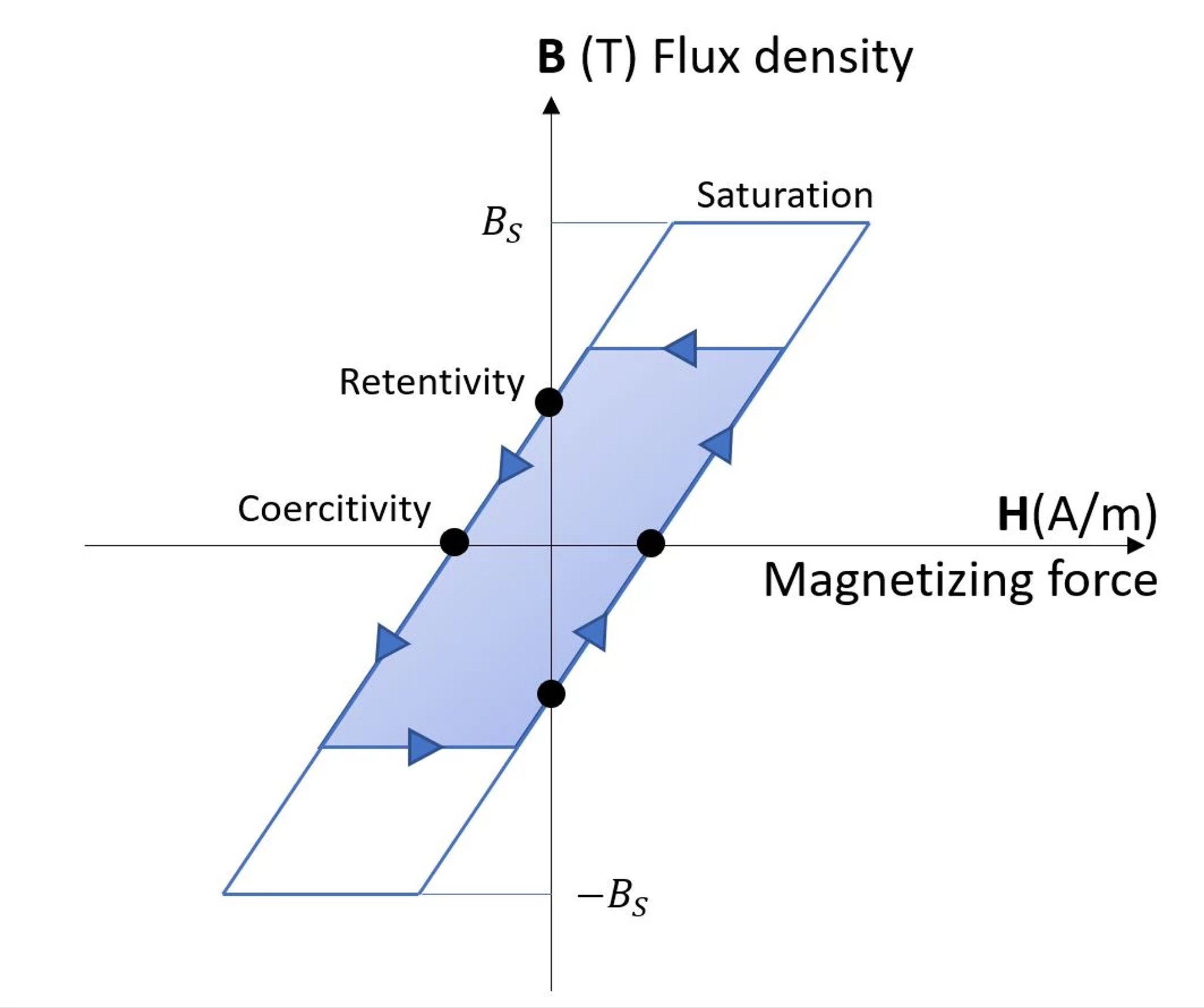 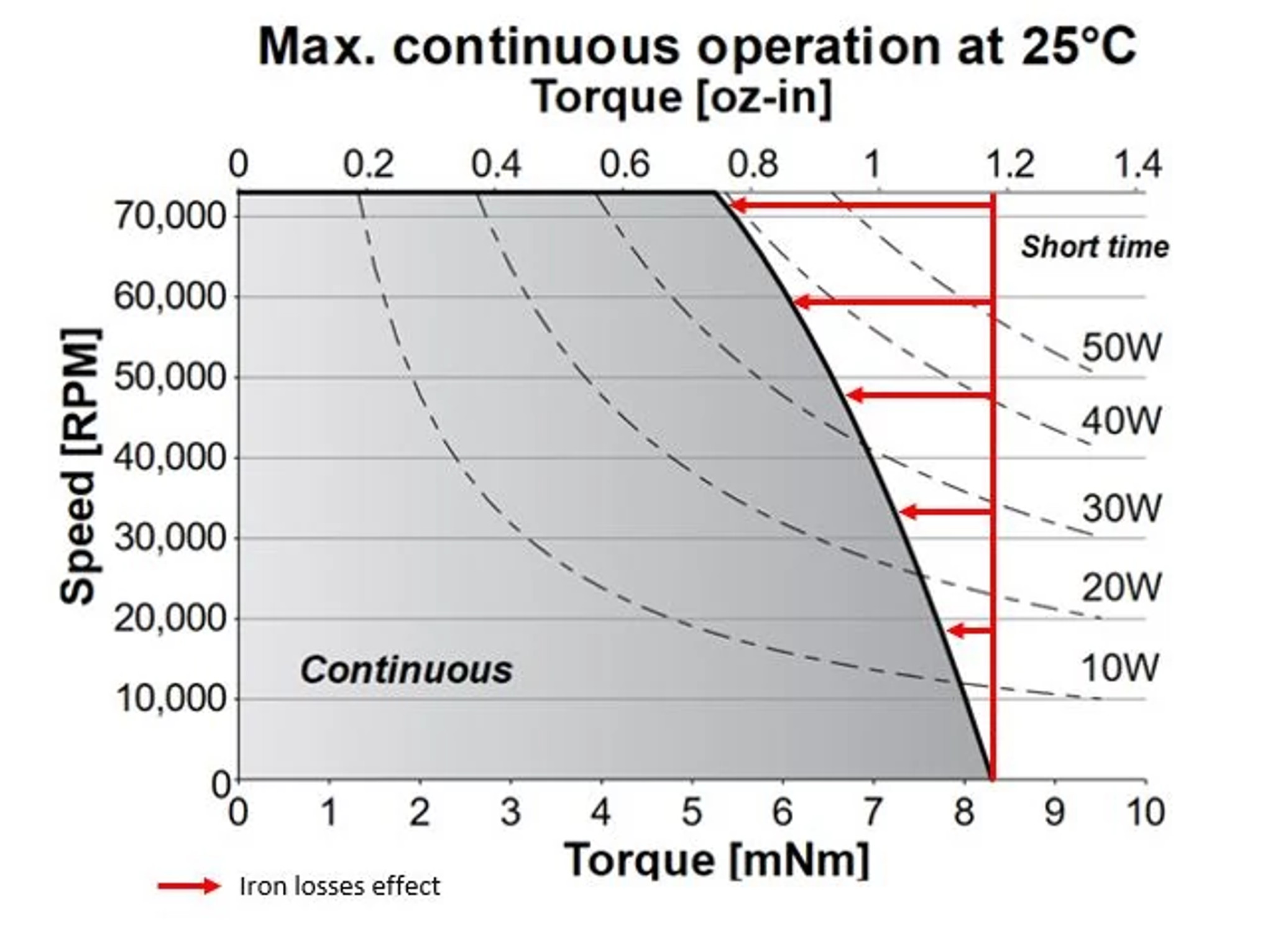 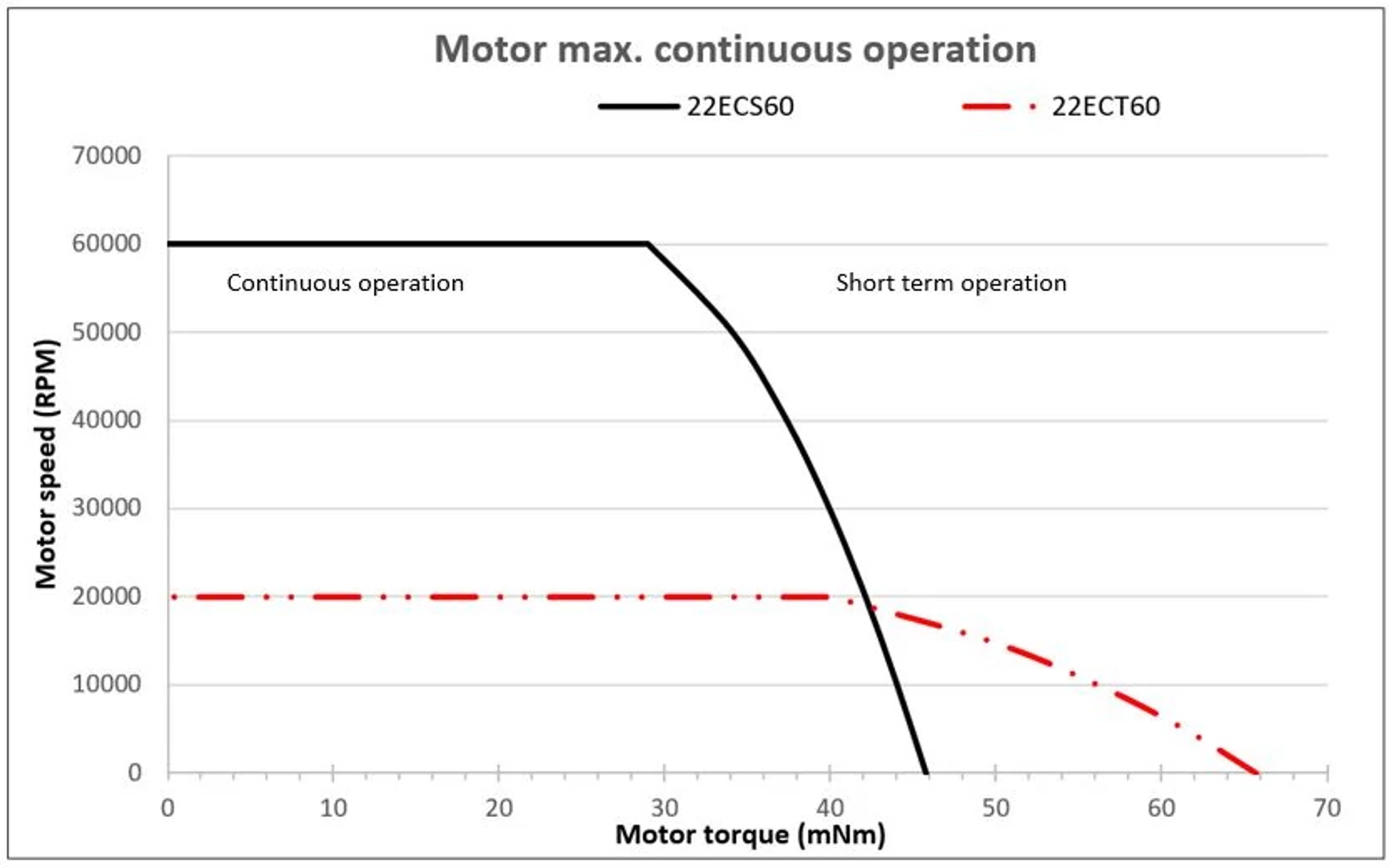