By definition, stepper motors are brushless motors; as such, they can provide numerous advantages over DC motors, especially for applications requiring a more cost-effective and precise positioning system. To select the right stepper motor for an application, it is critical that the design engineer both understand and account for the pull-out and pull-in torque curves of the stepper motor.

Figure 1 shows the torque developed by a three-phase BLDC motor with six-step commutation. The feedback of the hall sensors integrated into the motor is used to keep track of the rotor position. This information allows commutation of the three phases at the right moment to maintain an angle of 90° +/- 30° between the magnetic field of the rotor and the stator. There is a small current ripple, but the torque developed by the motor is rather stable and not significantly dependent on the rotor position. Using a high-resolution encoder for a more precise rotor position feedback would reduce the torque ripple to nearly zero.

Figure 2 shows a simple version of a stepper motor: a magnet with one pole pair serving as a rotor and two separate phases located in the stator. This design provides four full steps over one mechanical revolution. The resulting torque curves showcasing a continuous current being applied to each phase are illustrated in Figure 3 (blue and orange graphs). If the motor is driven in Full Step enabling only a single phase at a time, a current will be applied in the following order: A, B, -A, -B.

The green graphs in Figure 3 illustrate the resulting torque at the motor shaft. Unlike with a BLDC motor, the motor torque of a stepper motor will significantly depend on the rotor position. A stepper motor will typically be driven in open loop mode without rotor position feedback to achieve a cost-efficient and simple design. The commutation thus occurs with an external signal (steps per second) without knowing the current rotor position. An "ideal" commutation would enable the current in the phase when the rotor is positioned exactly between two phases. However, in open loop (i.e., without a rotor position feedback), the rotor may not always be in the ideal position. This uncertainty must be taken into account when sizing a stepper motor by applying a safety factor on the pull-out torque.

Now that we’ve covered these differences between three-phase BLDC and stepper motors, let’s look at how to understand the pull-out and pull-in torque of stepper motors.

How Pull-Out Torque Is Measured

Figure 4 showcases the measurement setup for the pull-out torque. The motor will be connected to a driver, which defines the direction of rotation, as well as the velocity of the motor by sending a pulsed signal. The motor shaft is connected to a variable brake system (e.g. an eddy current brake) which allows a variable load to be applied to the motor.

The measurement itself is conducted as follows:

In practice, the pull-out torque curve is used to define what torque and speed range the motors can be safely driven in open loop. For the maximum load torque, a safety factor of usually 30% is considered (represented in Figure 6 by the dotted blue line), as compared to the maximum available pull-out torque (represented in Figure 6 by the solid blue line).

Furthermore, the pull-out torque is used to determine the optimal acceleration profile for the motor. In the example shown in Figure 6, the motor should achieve a working point represented by the red cross. There are two ways to accelerate the motor to the required speed:

How Pull-in Torque is Measured

The pull-in torque can, for example, be measured with the setup illustrated in Figure 7. A disk is mounted on the motor shaft and a cord is wrapped around it. The tension forces F1 and F2 in the cord are measured, and the difference between these forces creates a load torque on the motor, which is dependent on the diameter of the disk. The resulting load on the motor shaft consists of pure friction torque with negligible load inertia. The only inertia present during the measurement will therefore be the rotor inertia of the motor. The motor is connected to a driver in open-loop mode and the entire measurement is done without an acceleration ramp.

The measurement is typically conducted as follows:

In practice, there are two key situations where the pull-in torque is used when sizing a stepper motor: 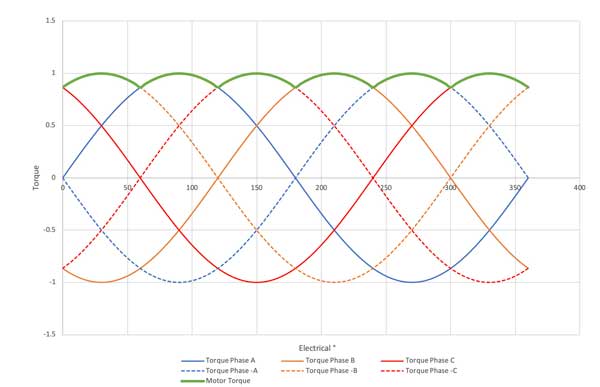 Figure 1 - Phase and Motor Torque of a BLDC Motor 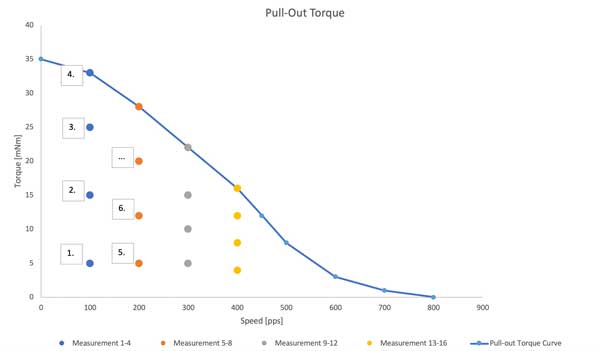 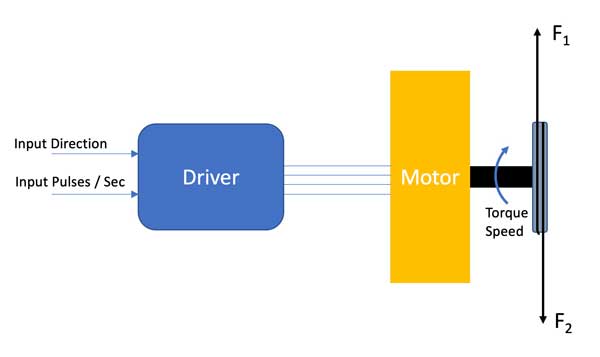 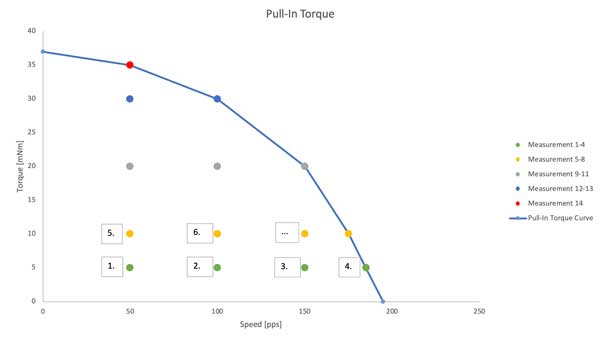