Influence of Center Distance Variation on Noise In Compound Gearboxes

This article presents the analysis of center distance influence on gearbox dynamics, which is characterized by time-varying mesh stiffness. System-level dynamic analysis and a detailed mathematical transmission model presenting the center distance as a variable have been used to predict the gearbox noise behavior. The center distance variation in the mathematical model is simulated by utilizing the housing bore position tolerance, with the influence on the noise characteristic being studied. The housing bore positions were displaced by specifying finite displacements of bearings, which are supporting shafts in the gearbox model. Multiple conditions based on housing bore tolerance ranges have also been studied. The results obtained from this paper may be used in gearbox diagnostics, with the sensitivity of housing bore tolerance also able to be analyzed.

Gears may be designed to operate at a non-standard center distance to introduce backlash, to accommodate space constraints, and to adjust for both anticipated deflections under load and geometry changes due to thermal effects. For proper operation, center distance must be maintained within predetermined tolerances. Since the center distance is a machined dimension, it may not come out to be exactly what the design calls for. Moreover, due to mounting inaccuracies, misalignment and other faults created during the running or gearing of the system, the desired center distance is almost impossible to accurately achieve or maintain. This means that center distance may increase over its standard value, which can lead to a variety of issues. This research concentrates on the impact of the changes in the gear teeth engagement that are caused by housing bore position variations, which is achieved by defining forced displacements at bearings supporting the shafts in the gearbox housing. These displacements eventually cause the misalignments of the shafts, which impacts the dynamic behavior and noise characteristics in terms of Transmission Error (TE) and Acoustic Noise.

The simulation focuses on a compound gearbox that consists of three spur gear pairs mounted on respective shafts that are supported by ball bearings connected to the housing. The simulation was completed by considering the center distance variation, specifically by displacing the housing bore connected to bearings. This, in turn, resulted in shaft misalignments. The impact of these misalignments was captured in the form of TE and Noise amplitude. The details of the gearbox are described in Figure 1.

During housing manufacturing, the housing bore position may vary between 30 to 80 microns depending on the type of manufacturing (e.g. machining or moulding). To simulate this behavior, three conditions were defined: firstly, a tolerance of 30, 60 and 80 microns (um) as the displacement; secondly, the bearings, which are reflected in shaft misalignment; and thirdly TE and noise. In addition to these, two analysis conditions were defined: 1) No load condition; and 2) Load condition – 0.5 Nm torque. The speed range considered is 0 to 5,200 rpm for the gearbox input shaft. The analysis considered the first, second and third harmonics of the gear mesh, which covers the maximum frequency of 4,000 Hz. Based on a detailed analysis of all three gear meshes, it was identified that third gear mesh exhibits a higher TE as compared to other two gear meshes. The remaining section of this paper focuses on the third gear pair mesh analysis and explains the significance of TE harmonics and its impact on acoustic behavior.

This section covers the importance of change in center distance and how this impacts the TE and noise results. To capture this condition, the shaft misalignment (covered above) is considered a critical parameter; to achieve this, displacements of bearings that are supporting shafts are used for misalignment considerations.

For this simulation, Brg-5 and Brg-6 are displaced in the X and Y direction and the shaft misalignment in skew position is used (Figure 2). No-load condition has lower TE when the Brg is displaced in X and Y direction as compared to Brg-6. The peak-topeak TE for skew positions X-80 and Y-80 microns are higher as compared to the 30 and 60 micron positions. Results of this simulation are provided in Table 1.

TE results are provided in Table 2 for a load condition with 0.5 Nm torque. TE results for the displacement of Brg-6 are higher as compared to Brg-5.

In acoustic analysis, the shrink wrap mesh forms the interface between the structural vibration domain and the acoustic domain. It is a watertight mesh that completely and closely encloses the structural mesh of the component being analyzed. The quality of the shrink wrap mesh is key, as it affects the quality of the radiated noise predictions. Model preparation for analysis, Node-4057, is shown on the surface of the housing in Figure 3. Node 4057 is the response node from which the noise at the surface location and the vibrations at this node are captured. Microphone 4057000 is located at 1,000mm from the surface of the gearbox (i.e., from node-4057).

In this simulation, a higher TE of the third gear pair with misalignment in Brg-6 is considered. Figures 6 through 8 illustrate noise prediction. The acoustic results window has the motor shaft speed (rpm) and frequency (Hz) on the X-axis, while sound pressure level in dBa is on the Y-axis. The acoustic results cover the first to third harmonic of the third gear pair, which corresponds to excitations of the first order as 2.3 shown in solid line, the second order 4.6 shown in dotted lines, and the third order 6.9 shown in dashed lines in Figure 4. Noise is measured with microphones located at 1,000mm. The violet lines represent the response frequency (Hz) respective to the orders.

In Figures 4 through 7, the left images showcase pressure level (in dBA) vs response frequency (in Hz), while the right-side images represent pressure level (in dBA) vs speed (in rpm). Figure 4 includes no load and no misalignment condition, where there are nominal conditions; no displacement or misalignment is considered. The max noise amplitude observed is at 3,200 rpm and the dBA level observed as 38.

Figure 5 illustrates BRG-6 being displaced by the skew position as (skew x-30, y+30) microns. As compared to nominal conditions, the displaced condition results in higher deflection in the shaft and housing, due to TE and noise levels being higher. The maximum noise amplitude is observed at 3,200 rpm and the dB level observed is 50. Similar results were found in the misalignment values at 60um and 80um as were found at 30 microns (shown in Figure 5); the displacement applied for bearings and impact of shaft deflections on noise amplitude are provided in Figures 6 and Figure 7.

Acoustic analysis has highlighted the influence of shaft misalignment on noise prediction; a few frequencies and a particular speed range may have result in higher noise levels. System level static deflection is a similar tool which provides a reliable indicator of the overall system deflection, especially when defined torque is applied to the system. Based on the boundary condition, this illustrates the system's deflection behavior. This analysis also provides specific findings about the localized deflection of the system based on the mounting of the gearbox in device. This helps to check the maximum level of deflections the system has at maximum load, as well as checks and whether there are any improvements required to control deflections by altering the mountings on gearbox, material combinations, or load conditions used in the application. For example, Figure 8 shows the deflection in the gearbox at the system level when 0.5 Nm torque is applied with a displacement of x-30 and y+30 um for the Brg-6. The max deflection is around 68 microns, which is somewhat high; some measures to reduce this are by increasing the stiffness in this area.

This paper covered the critical aspects of the housing bore position tolerance, which impacts shaft misalignment, as well as demonstrated how the simulation can help to assess the sensitivity to the noise levels, the importance of the manufacturing variations, and the critical nature of having a reduced tolerance band to lower the system TE and noise levels. This paper also addressed the shaft position, which impacts both the gear mesh that drives the mesh force, as well as the vector direction, which impacts the TE and noise. There are several combinations possible to perform the sensitivity analysis for noise and TE for the center distance tolerance within the specified range, considering the simulation time and research only work with a few options, including out of parallel and skew positions.

The study can be used as a guide to optimize gearbox designs at the component level, as well as at the system level (i.e., housing, gear, shaft, bearings, and mounting points), where the TE can be reduced, the source of noise can be addressed, and can be kept at lower levels at design stage. Future studies can also address aspects such as gear quality, which influence the gearbox’s pitch error, runout errors, and bearing clearances. 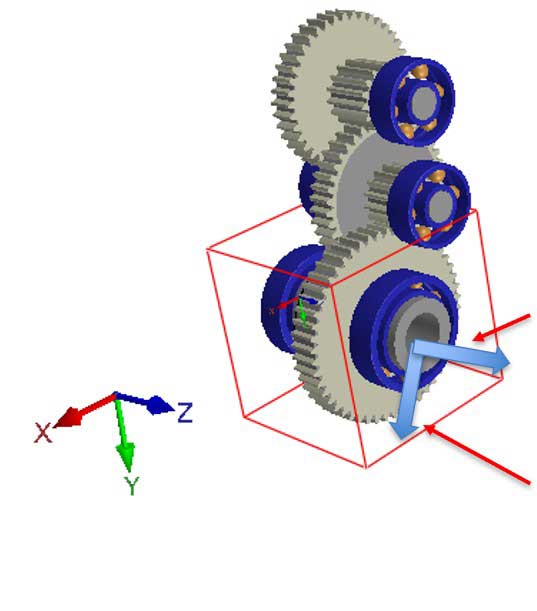 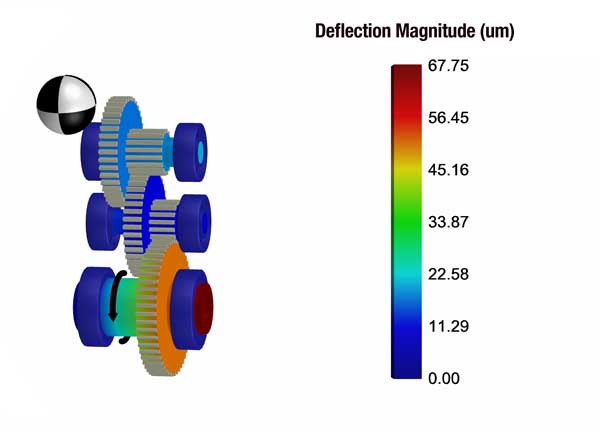