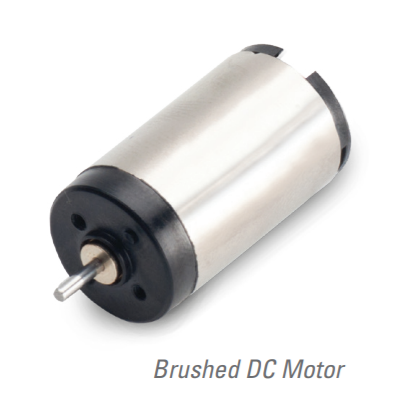 Many applications utilizing Portescap’s brushed DC miniature motors demand driving the motors at more than one load point or through specific load cycles. Running the motor at usable load points requires a variable, controllable power source, which can be achieved through continuous linear regulation power supplies or through Pulse Width Modulation (PWM). The linear regulation is generally inefficient and demands increased housing space. Moreover, in battery-driven applications, it becomes impractical to use the linear regulation at varying load points. PWM voltage regulation, on the other hand, is efficient and can be used effectively with battery or DC power-driven applications. The improved efficiency of the PWM drive increases battery life and reduces the heating of the electronic components.

One trade-off of using PWM with a motor is the appearance of eddy current losses in the rotor windings due to the continuous PWM switching, which in general, is not present in the case of a linear power source. However, with a proper design of PWM, the eddy current effects can be minimized, allowing the motors to be optimally driven.

Portescap brushed DC motors offer very low inertia and low inductance. This enables use of the motor in an application where dynamic behavior and fast responses are desired. The use of PWM enables current control in the windings. Hence, the output torque, which is linearly proportional to the average winding current, can be correctly controlled; thanks to our coreless design.

Unlike a pure resistive load, for a DC motor, the resistance, inductance and back EMF on the rotor windings are deciding factors for optimizing PWM frequency and duty cycle.

Fig. 1 shows an equivalent circuit of a motor driven using a linear DC source. Here, the current is a function of the winding resistance only. The inductance does not affect the current as at constant source, the impedance of an inductor is zero.

In addition to the Ohmic resistance, a DC motor winding offers inductance to the PWM circuit. Moreover, a back EMF, equivalent to motor characteristics (KE) and speed, is generated across the terminal. This complicates the design of a PWM circuit as not only the duty cycle but the frequency of PWM needs to be controlled precisely for optimum motor performance.

When the motor is at rest or rotating at a very low speed, the back EMF can be neglected and a simplified equivalent circuit of the motor is shown (Fig. 2).

The free wheel or snubber diode shown in Fig. 2 should never be omitted while using a varying voltage such as in the case of PWM driving the motors. The presence of the free wheel diode allows the charge to dissipate without arcing at the time of switching.

The presence of back EMF along with the RL circuit in a brushed DC motor brings non-linearity to the PWM control and both the PWM frequency and PWM duty cycle become significant for optimal output power. While using PWM to drive the motor where EMC (electromagnetic compatibility) is critical, it is recommended to analyze the radiation effects as the radiated electromagnetic energy is generally higher with PWM when compared with DC linear sources.

Ignoring the presence of back EMF for simplicity, the current rise in a simple RL circuit can be given as

Once the steady state is reached, if the supply is disconnected, the current through the RL circuit decays exponentially as shown in Fig. 5.

When using a PWM drive with brushed DC motors, the internal inductance of the rotor acts as a current filter and is advantageous for the drive circuit. However, other design parameters, such as PWM frequency and duty cycle, impact the current ripple and hence the life of the brushed commutation.

As the PWM frequency is increased beyond a threshold value, the PWM on and off time becomes less than the time required for the RL circuit to operate and the current to reach its steady state. Hence, the current oscillates between two non-steady state values, which gives rise to current ripple. Fig. 6 shows the conditions when the PWM frequency is sufficient for the steady state to be reached. Fig. 7 shows the condition when the frequency of PWM is higher than the time needed for steady state and the current through the motor oscillates. From a design perspective, the current ripple should be reduced by optimizing the driving frequency so that a near-linear torque behaviour can be achieved.

It is also advisable to keep the PWM frequency higher than the human audible range (20 Hz – 20 kHz) as a current ripple in that frequency range may introduce noise during motor operation.

For Portescap coreless motors, we suggest keeping the current ripple as low as possible. Typically, a ripple of
<10% is considered a low value. A higher ripple would affect the performance:

II. Portescap brushed DC motors do not use iron laminations, so the eddy current and hysteresis losses in the magnetic circuit are directly proportional to the current ripple and would reduce the overall performance of the motor.

III. For precious metal commutation, the increased electro-erosion would affect the life of the motor as electro-erosion is proportional to the factor L.Ieff 2 . Where L is the inductance and Ieff is the effective current through the winding.

IV. For carbon brush commutation, increased current ripple increases the patina accumulation. (Patina or film is the copper oxide layer formed on the commutator surface of the carbon brush which is helpful in improving the commutation and reducing the friction.) Hence, at lower speeds, the brush contact would deteriorate. At moderate to high speeds, the patine would not affect the motor performance significantly.

The inductive voltage across the terminal can be given as

Where L is the inductance, UL is the voltage generated across the inductor, and T is the infinitesimal time within which the current changed by ∆I.

For the PWM operation of the motor, the voltage across its terminal is opposed by the back EMF generated across the motor terminal. Hence, eq. (3) can be rewritten for both the current rise and current fall in PWM operations as: 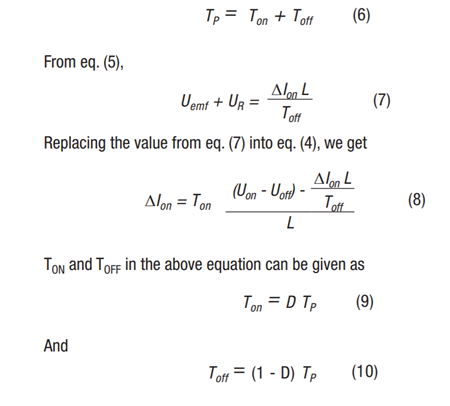 Where, D is the duty cycle of the PWM signal.

Eq. (11) can be used to extract the current ripple in the motor due to a PWM signal of duty cycle ‘D’ and frequency ‘1/TP’.

It is of particular interest to note from eq. (11) that the current ripple is maximum when the duty cycle is 50%. Hence, it is suggested to the PWM designers to run the motor away from 50% duty cycle zone.

Also, from the above equation, the current ripple depends only on the motor inductance and not on the electrical time constant of the motor.

Ideally, for Portescap’s coreless motors, the difference (UON – UOFF), sometimes given as ∆U, should be kept as low as possible depending on maximum motor input voltage and the application speed. The inductance of the motor across its terminal is a function of the PWM frequency. The Portescap product catalog shows the motor inductance at 1 kHz. At 100 kHz, for example, the inductance can decrease to as low as 20% of the catalogue value.

Compared to an iron core motor, the inductance of Portescap motors is lower by a factor of two. Also, the Quality factor is poorer as there are no iron laminations in the rotor windings. Hence, the PWM drive with a Portescap motor will have relatively higher losses and would offer less electronic stability.

In brushed DC motors, the dominant failure mode is the brushed commutation. During the lifetime of the motor, the brushes, either carbon-graphite or precious metal, are spring loaded and mechanically coupled with the collector segments to charge the coils. Hence, the brush wear is a function of mechanical friction when the brushes slide over the collector segments and electro-erosion caused by electrical discharges at the time of commutation.

When using PWM drives to run the motor at various speed and load points, the estimation of motor life becomes a complex combination of various factors driving its wear properties. These factors can be:

i. Higher current density in the commutation because of reduced efficiency, high mechanical friction, insufficient lubrication or current recirculation.

iii. Elevated working temperature of the motor due to environmental conditions or high power density of the motor which reduces the lubrication quality.

Depending on the application and type of source used to power the motor, the life expectancy may depend on one or more of the factors described above.

For motor designs where the load point requires the motor to run at moderate torque and speed, no axial and radial loads acting on the shaft and in a moderate temperature range (typically <60º C), the wear is generally dominated by electro-erosion. Then the motor life is inversely proportional to the inductance and square of the current:

The above equation considers a linear power source or a PWM source with current ripple negligible compared to the average current through the motor. In practical scenarios, the ripple can contribute to reduce the motor life significantly.

With Portescap brushed DC motors, in order to reduce the current ripple to less than 10%, the frequency range can be as high as 40 kHz – 120 kHz.

Eq (14) holds true where Ilosses is low compared to Imotor. When the current ripple is high, instantaneous current surge through the motor heats the motor and the equation should be modified as

Considering a PWM with 50% duty cycle where the ripple is maximum and average motor power is ‘P’, the integral part can be re-written as

There are a couple of things that can be done to improve motor life while using PWM:

The current ripple can be reduced by increasing the PWM frequency. If the PWM frequency is significantly higher than the L/R time constant of the motor, the ripple is further reduced. For Portescap coreless design, a ripple of <10% is recommended in terms of motor life.

Another general intuitive approach to reduce the current ripple is to add an external inductance in the motor circuit which acts as a current filter. This generally improves the efficiency. However, the presence of an inductor worsens the overall electro-erosion of the brush-commutator system as electro-erosion is directly proportional to the inductance of the circuit. Hence, unless efficiency and motor heating are the only concerns, we do not recommend this solution.

In designs like the one shown in Fig. 8, the efficiency of the system improves drastically, and the motor brush life is better compared to the solution where an external inductance is added to the circuit.

To optimize the circuit, the voltage ripple, given by eq. 18, should be minimized. A value of less than 10% is good enough from practical motor operation point.

From the above equation, at higher frequencies the value of the inductor and capacitor would reduce and hence the overall packaging of the PWM drive would reduce. Further, ultrasonic vibrations can be induced in the rotor when driving the motor at lower frequencies. It is therefore suggested to drive the motor at frequencies higher than 20kHz.

For battery driven applications where miniature motors are used, the efficiency of the application drives the charge cycle of the batteries. A PWM drive is advantageous and enables the motor to run at different speeds. An accurate PWM design is however needed to ensure that the current and voltage ripples are neglible and motor life is not impacted. 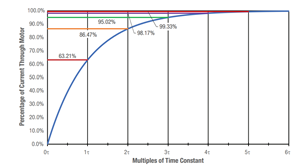 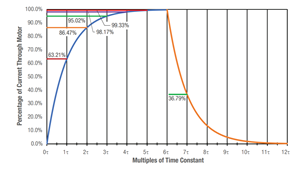 Figure 5: Exponential rise and fall of current in an RL circuit 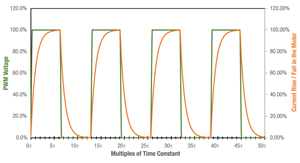 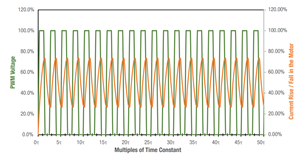