Working on a motorized development requires some knowledge about motors and controllers. This article is focused on the stepper motors which is a type of brushless DC motor with a high number of poles. This technology is generally driven in open loop without any feedback sensor, meaning the current is typically applied on the phases without knowing the rotor position. The rotor moves to be aligned with the stator magnetic flux, then the current can be supplied to the next phase.

We will consider two ways to supply current in the coil: bipolar way and unipolar way. In this article, we will explain the differences of bipolar and unipolar motors and driving methods. We will show the advantages and limits of both technologies.

Let’s take an example of a four step, permanent magnet stepper motor (see figure 1). The rotor is made with a one pole pair magnet, and the stator is composed of two phases, Phase A and Phase B.

For each coil, the current can only flow in one single direction. That’s why we call it unipolar.

In the case of the voltage drive, the control system is very easy because there is one transistor (switch) per coil. When the transistor is closed, the coil is powered. To commute, the transistors are alternatively closed and opened.

The transistors Q1 and Q2 cannot be closed at the same time. To power phase A, we close either transistor Q1 or Q2, depending on the current direction we want to work (see figure 3).

With the unipolar control, only half of the phase is powered at a time meaning the current uses only half of the copper volume. Typically, with voltage drive serial resistances are applied to decrease electrical time constant (see more details below).

Bipolar motors need only one coil winding per phase. We call it bipolar because the current can go in both directions per coil. For control, eight transistors with two H-bridges are required (see figure 4).

To do the commutation, the transistors are alternatively closed and opened as shown below (see figure 5).

The advantage of a bipolar drive is that all the copper per phase is used.

Such bipolar drives are used either in voltage drive or in current source. In case of current source, usually current in each phase is controlled with a pulse width modulation (PWM).

In case of voltage drive, controlling unipolar motors is very easy as it requires a simple electronic with four transistors. This is a very cost-effective solution. Engineers used to be interested in this type of solution many years ago when the electronic components were more expensive than today.

Bipolar motors can be driven with a voltage-drive; it requires 2H bridges.

For current drive, we recommend choosing a bipolar mode. Working in current drive with unipolar technology requires a more complex electronic solution for lower motor performances than with a bipolar driver.

CAUTION TO TAKE WITH A VOLTAGE DRIVE

Due to the inductance effect, the current needs some time to rise in the coil. Either with unipolar or bipolar, you can add a serial resistance to decrease the electrical time constant (L/R).

By adding an external resistance, the current is decreasing (i= U/(R+r)). In summary, with the additional resistance for the same power supplied, we will have:

Note: If we increase the supply voltage, we can compensate for the lower current, but the overall energy efficiency will be decreased. The torque is improved at high speed and maintained same at low speed. 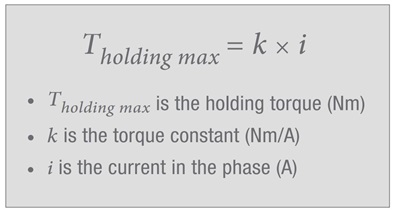 Increasing the current generated extra heat due to the joule losses dissipation (Pjoule = R × i 2 ). The current supply is limited by the thermal capability of the coil. The coil temperature can generally reach the coil’s maximum, admissible temperature, typically 100°C or 130°C, depending on the motor type.

Now, let’s look at the joule losses in both combinations (see figure 6), considering 1 phase ON:

Considering each individual coil has its own resistance, inductance and torque constant, and if the joule losses are same for both cases, Pjoule uni = Pjoule uni = P0
…then we will have:

For the same joule losses dissipated, the bipolar motor can produce √2 (≈40%) more torque than unipolar drive.

As demonstrated above, for the same power dissipated, the bipolar mode can deliver 40% more torque. However, at high speed in voltage drive the unipolar motor can deliver higher torque than bipolar motor as the current can go faster in the coil. You can see an example below (see figure 7).

If the unipolar motor has eight wires, it can be converted into a bipolar version by connecting the half-phases.

If we work with 8wires motor in bipolar, the coils can be connected in series or in parallel. Both options have the same motor regulation (R/k^2) and the same torque performances for the same electrical power (see figure 9).

A serial assembly has a resistance four times higher than a parallel assembly.

A serial connection requires twice the current and half of the voltage of a parallel connection.

A serial or parallel connection will match the power supply.

Both unipolar and bipolar assemblies have advantages (see figure 10).

The unipolar control was commonly used in the past. Due to the cost improvement of electronics, the trend now is to work with bipolar in current drive. For voltage drive, unipolar is still a cost-effective option. 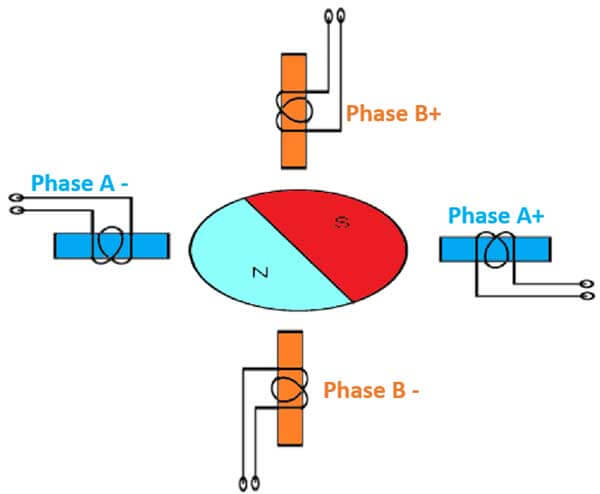 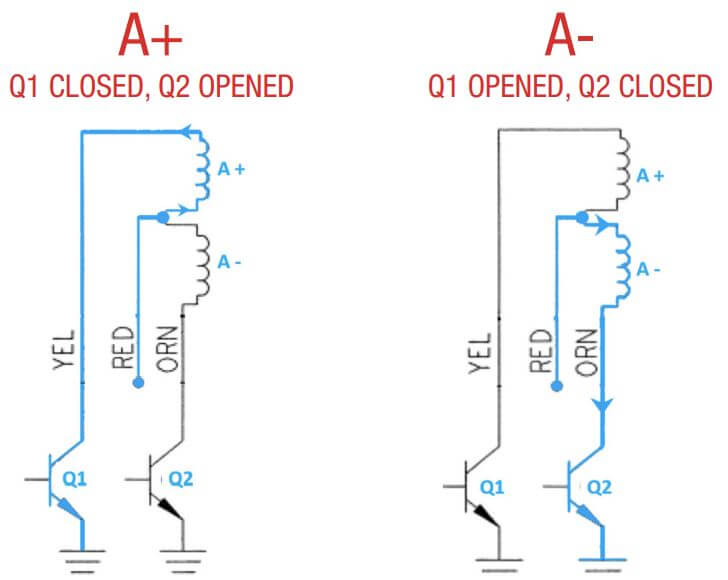 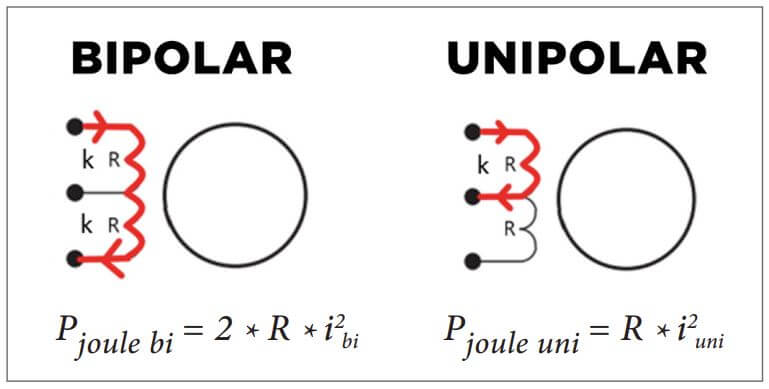 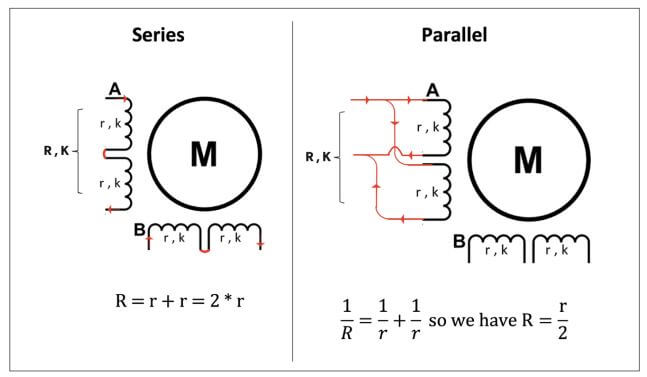 Figure 9. Differences Between Series and Parallel