Converting electrical power into mechanical power always comes with losses during the process. These power losses are mainly turned into thermal power and tend to be higher in magnitude when the delivered mechanical power is greater. The thermal energy generated inside an electric motor creates a temperature rise that will result in a heat transfer from warmer to colder (thanks to conduction and convection), and eventually carries the heat outside of the motor.

One of the biggest challenges for electric motor manufacturers is to ensure that the instant internal temperature of the motor never exceeds its various components’ maximum, admissible temperature. Depending on the design of the motor and the materials used, the thermal phenomena will dictate the motor’s performance.

Designers typically consider two areas of improvement to increase the performance of a motor without overheating and damaging its components:

To help you understand this phenomenon, we will use an analogy of water filling a bathtub that is simultaneously leaking.

Similarly, the heat dissipation of a motor is proportional to the delta between the inside temperature of the motor and the outside (ambient) temperature. But as the water flow depends on the outlet hole diameter, the heat dissipation also depends on the thermal resistance, which defines “how difficult” it is to carry heat out of the motor. The lower the thermal resistance, the easier and faster the heat will be led outside the motor, meaning a greater dissipation power.

Usually, the most critical component is the coil, as this is the very place where the joule heating occurs. In the case of excessive temperature, the insulation coating around the copper wire would end up melting, resulting in permanent damage to the motor.

A coreless brush DC motor is typically designed as a self-supporting coil rotating in the airgap between a permanent magnet and the housing, which are both part of the stator.

The joule heating power (W) produced in the rotating coil is directly linked to its electrical resistance R (Ω) and to the current flowing through it, I (A). There are no iron losses as the rotor is ironless.

As the coil temperature rises, the heat will transfer from the coil to the tube (1), and then from the tube to the ambient environment (2), as shown on figure 2. These two successive steps have different thermal resistances (Rth1 and Rth2, respectively), since individual materials have disparate thermal conductivities, and the shape, mass and surface area of each part also has an influence on how heat will be transferred.

A matter of balance between generation and dissipation…

Assuming the electrical current I flowing through the coil is not excessive, the coil temperature will rise, and the heat dissipation will also increase up to a point (because proportional to Tcoil - Tamb) where the heat dissipation will exactly compensate the heat generation. At this point, the thermal energy contained in the motor is constant over time, meaning that the temperature of its components will no longer vary.

It is possible to calculate the steady temperature of the coil as a function of the electrical current I (A), the electrical resistance R (Ω), the thermal resistances Rth1 and Rth2 (K/W) (added as they are consecutive) and the ambient temperature Tamb (K), since the heat dissipation is balanced with heat creation at steady-state:

The electrical resistance increases as the temperature rises… 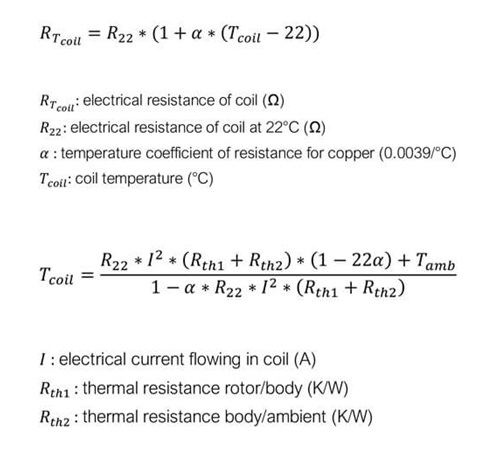 As an example, considering a 100°C coil temperature elevation (Tcoil-Tamb), the above formula shows that the coil resistance is 39% higher at 122°C compared to its resistance at 22°C (R22), which is a drastic increase and cannot be neglected in the thermal calculations.

Due to this phenomenon, the joule heating power R*I2 is therefore greater at high temperatures (assuming the current is still the same), and will lead the coil to reach its final steady state at a temperature that can be calculated as follows:

Table 1 shows that after a while (depending on the thermal time constant) the coil temperature is increasing slower and slower until it reaches its final steady-state temperature.

Let’s consider the electrical current I would now be higher (due to a heavier torque load, for example), the coil would then stabilize at a higher temperature than before. The highest acceptable stabilized coil temperature must not exceed the coil’s maximum admissible temperature, specified by the copper wire manufacturer (for example 125°C). Hence, this defines a maximum electrical current value that can be back-calculated with the previous formula, and that is usually referred to as “Rated current” or “Maximum continuous current” in motor specifications. As torque and current are proportional (if no saturation), this also defines the “Rated torque” or “Maximum continuous torque”.

Brushless motors use the same working principle as brushed motors (Laplace force applied to an electron moving in a magnetic field) except that the coil is fixed in the stator, and the permanent magnet is rotating with the shaft. The phase commutation is operated electronically.

An additional heating source inside the motor…

Having a moving magnetic field with regards to the stator that contains iron laminations (to close the magnetic field inside the motor) results in a phenomenon called “iron losses” which consists in having an electrical current induced in the lamination stack of the stator. This current causes heating generated inside the stator, which adds to the joule heating already generated in the coil (as in brushed motors). Since iron losses are proportional to the motor speed, they can be neglected at low speed but tend to become greater than joule losses at high speed. Due to this, the torque must be kept lower at high speed.

Back to the water analogy, the bathtub would be supplied by two water sources, one being joule losses and the other iron losses.

By mechanical design, brushless motors can reach much higher speeds than brushed motors, as their speed is not limited by the mechanical brush/collector commutation system.

The split between the two heating sources can be seen as a trade-off between joule losses at high torque (low speed) and iron losses at high speed (low torque), but the thermal challenge remains the same: keep the coil temperature below its maximum, admissible temperature.

As mentioned previously, we consider two different thermal resistances for the heat to travel from the coil to the outside environment. Rth1 is intrinsic to the motor design. However, Rth2 depends on both motor design and the motor surroundings. Indeed, creating a contact between the motor and another body having a high thermal conductivity will help the motor dissipate its heat and operate at a cooler temperature.

Depending on the configuration and more importantly on the material thermal conductivity, those surrounding elements can either help or prevent the motor from dissipating its heat to the outside environment.

In most cases, a motor is installed on metallic parts, often mounted from its front face onto a metal stand or frame. The favorable thermal conductivity of metal will help drain heat out of the motor (as shown on figure 5), which will provide better cooling than having the motor surrounded by air only.

Consequently, it is appropriate to modify the value of thermal resistance Rth2 to reflect this better cooling capability, depending on the motor mounting configuration in the application (material, size, surface area, thermal capacity of the external element all impact the actual Rth2 to be considered).

The equivalent for the bathtub analogy would be to have a larger outlet diameter, to drain the water at a faster pace without the need to have a higher water level (pressure) inside the bathtub.

This theoretically depends on every application, but a fair estimation is to consider half the value of Rth2 in the thermal calculation (the lower the value, the better the cooling), which subsequently results in a higher rated torque (maximum continuous torque) for the same maximum coil temperature Tcoil (torque being proportional to electrical current I).

Motor designers and manufacturers like Portescap engage with customers early in their development process to assess the dissipation capability of a motor or a motor/gearbox assembly once installed in a given application to best assess the working conditions and leverage the full potential of the motorization system.

Some applications require high torque for a short duration only. Industrial power tools, such as screwdrivers, require speed during the run-down phase and then a peak torque during the tightening phase which lasts about a second or less.

It is acceptable to supply a motor with an electrical current that exceeds the motor’s maximum continuous current, as long as the coil temperature does not exceed its maximum admissible temperature, which means that the duration of this operation should be limited.

Considering an empty bathtub, we would suddenly open the faucet with a very strong water flow. Since we usually consider a peak torque for a short duration (few seconds), we can typically neglect the heat dissipation (which has a longer time constant) and consider the system as adiabatic. 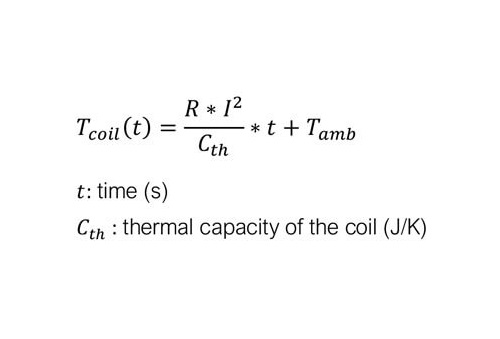 In some cases, the application’s torque requirement is a given torque profile that is repeating over time. To some extent, the highest torque during the cycle can exceed the motor’s maximum, continuous torque, depending on the torque profile and the duration of each step in the cycle.

If the duration of one cycle (repeating period) is significantly shorter than the thermal time constant, we usually consider an equivalent continuous torque value (or current value) that can be calculated as a quadratic mean (RMS, root mean square) due to joule heating being proportional to I2.

Once the RMS current is defined, we can consider this current as a continuous value over time, and simply make sure it is not greater than the motor’s maximum continuous torque.

As a reminder, the impact of the thermal resistance mentioned earlier (depending on the motor’s environment in the application) also plays its role here, since we are assimilating this case to a steady-state operation (still supposing the period of the duty cycle is shorter than the thermal time constant).

As heat management is key to a motor’s performance, engineers have found alternative ways to further improve the way motors handle heat. One way to do this is to design stators with an integrated air path so that the air flow can carry heat away from the motor. This would focus on the massive heat convection inside the motor, rather than the designs that rely mainly on heat conduction. This additional heat sink can be viewed as a reduced thermal resistance as it helps drain heat out of the motor.

In some cases, the air flow can be driven by an external source such as a compressed air system. But when the motor is embedded in a portable device or in any environment with no compressed air available, it’s possible to integrate a fan on the motor shaft, which will drive the airflow through the motor body as it is operating. In this case, the higher the motor speed (hence fan speed), the stronger the airflow and the lower the thermal resistance. In other words, the torque capability of such motors can be surprisingly higher at high speed than at low speed, since the heat dissipation is drastically improved when the fan runs faster. This is true to some extent, because the fan driving air applies a load torque to the motor, which eventually creates additional heat generation when the speed runs very high.

The performance of electric motors depends on many aspects, one of them being heat management. Motors can be improved to address many challenges, according to each application’s duty cycle, environment and critical success factors (whether delivering the highest torque, highest speed, best energy efficiency to prolong battery life, or operating at the coolest possible temperature…). It’s best to seek a partner that provides extended support to understand customers’ challenges and drive success by choosing the best fitting solution to each application. 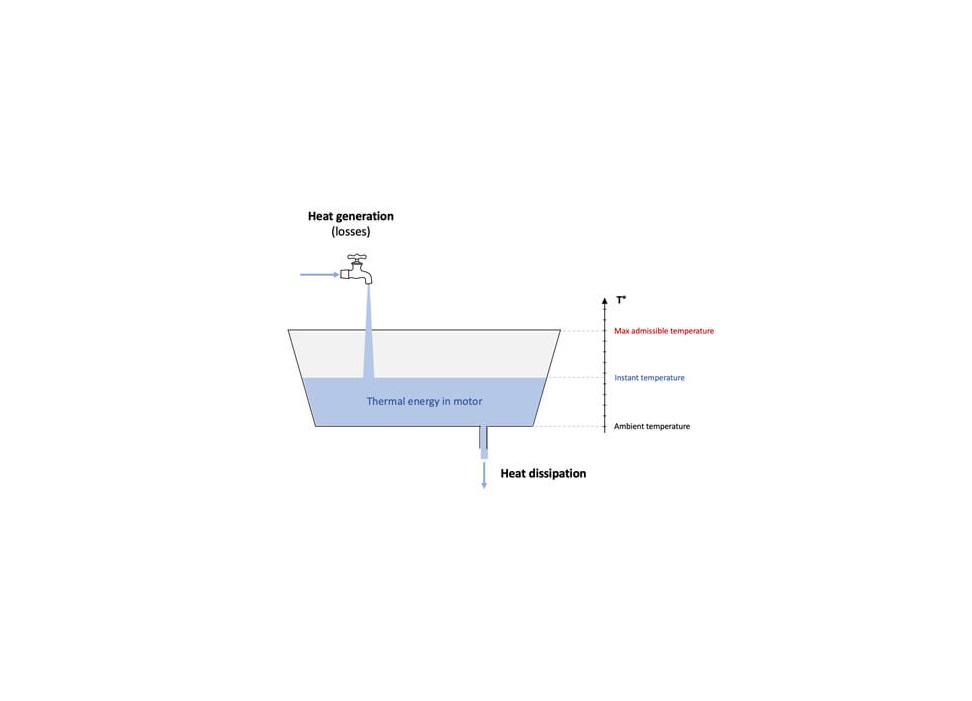 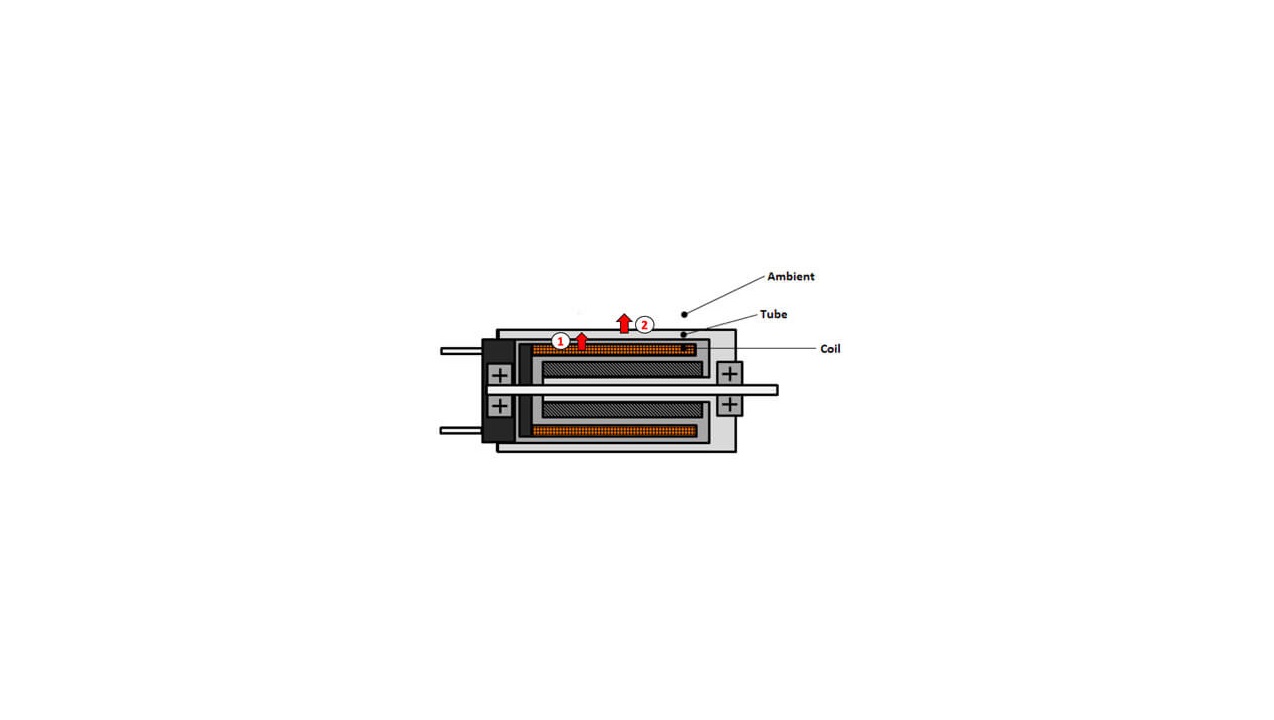 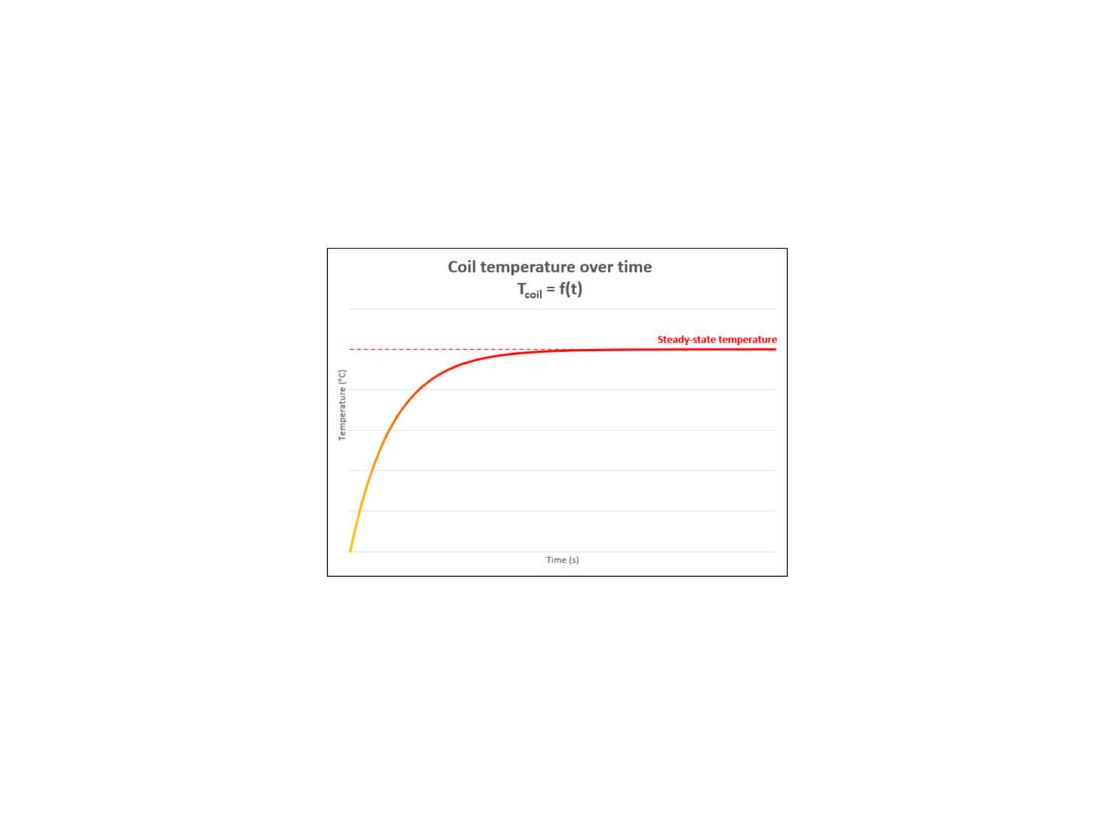 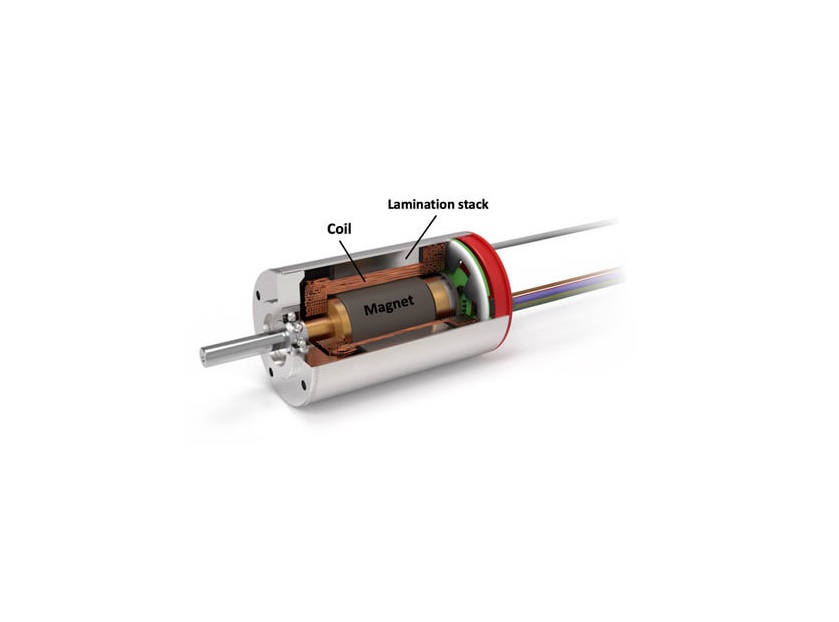 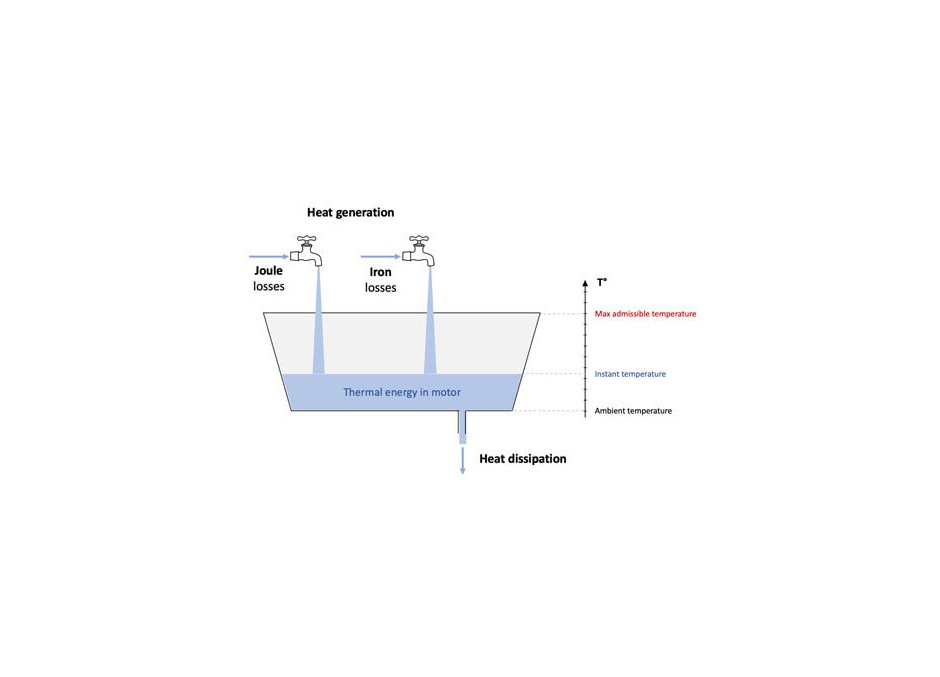 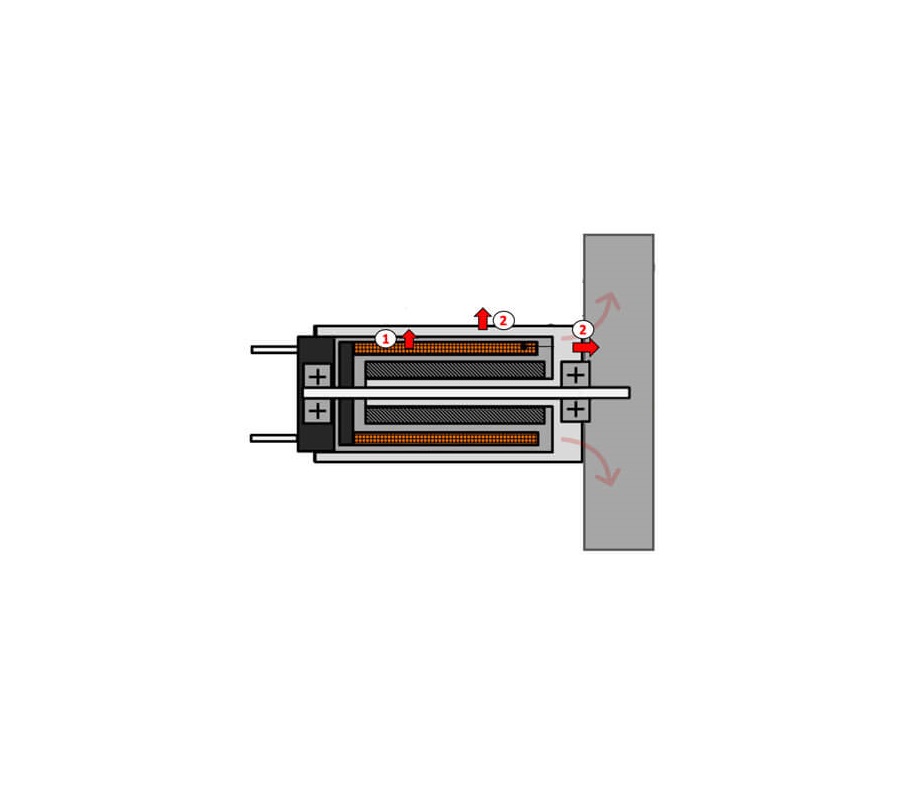 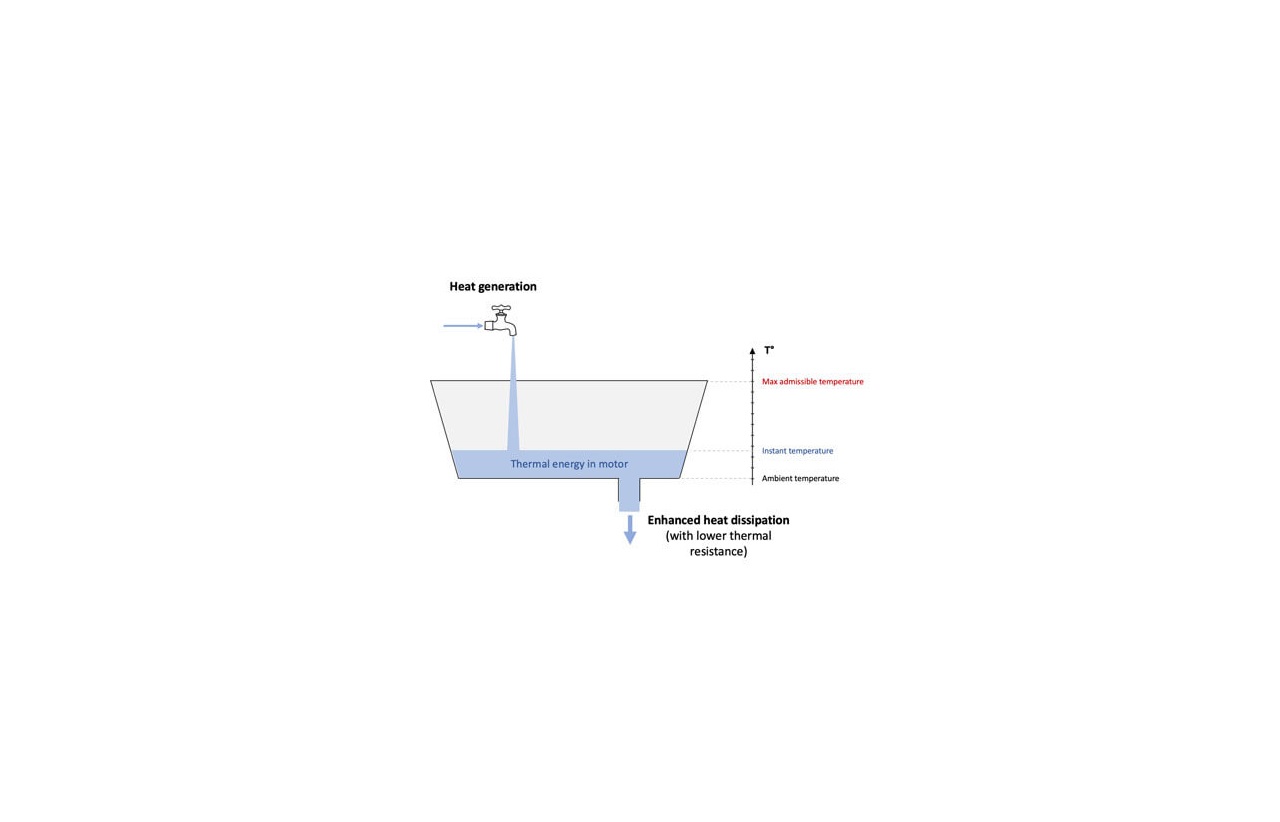 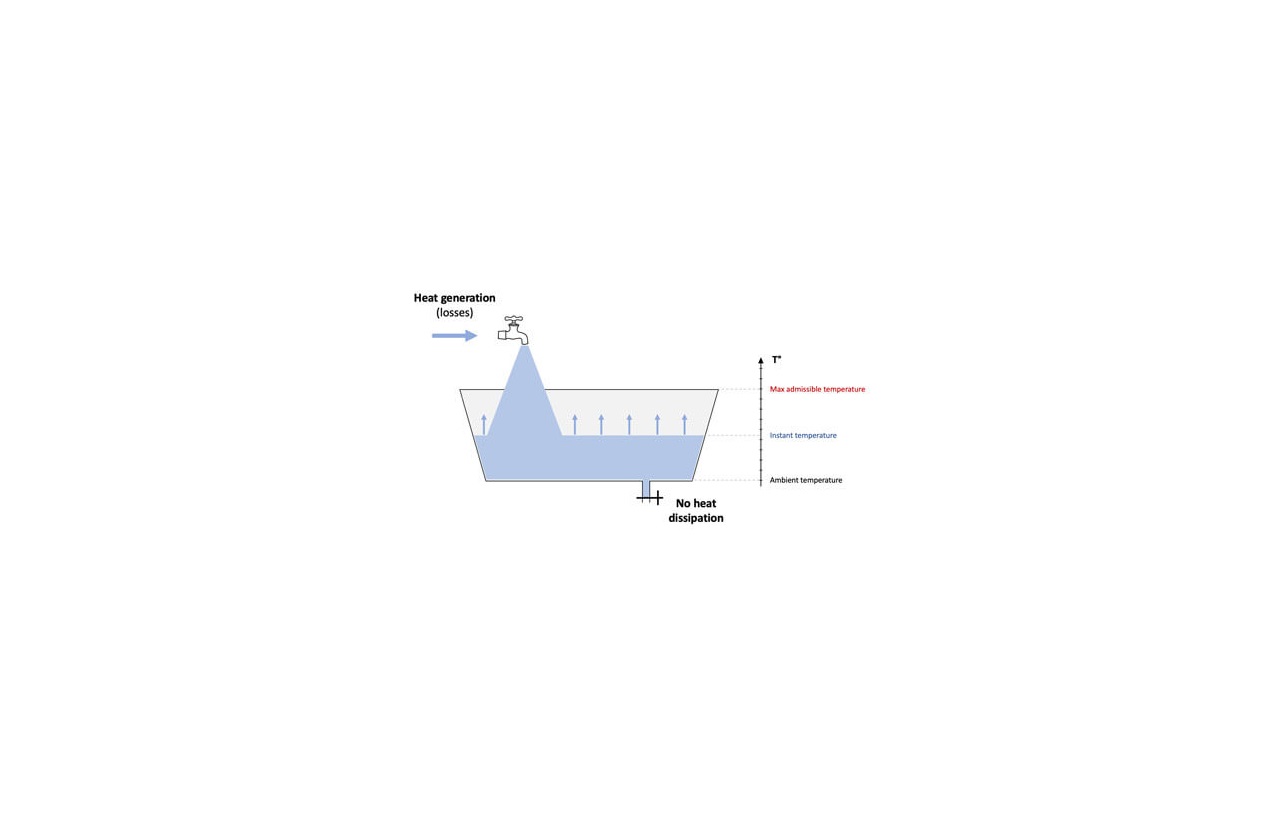